Greatest athlete of the 20th century, Edson Arantes do Nascimento quickly became a pop icon and helped building the image of Brazil around the whole world. To showcase this legend to generations who did not see him play, the Football Museum will soon open the exhibition called Pelé 80 – The King of Football, curated by set designer Gringo Cardia, in honor of his 80th birthday on October 2020.

Pelé 80 – The King of Football is a fun exhibition that brings the image of the King to an universal and contemporaneous look: right at the entrance of the museum, a massive sculpture of Pelé invites the crowd to take selfies and pictures before continuing to the screening of the movie created by Gringo Cardia specifically for the exhibition.

Pelé’s entire journey is told by means of montage and animation of 444 historic images, since the early years of Pelé in TrêsCorações, countryside of Minas Gerais, until gaining worldwide fame in the World Cup 1958, including 18 years playing for Santos Futebol Clube, the final enshrinement in the World Cup 1970, and the last match playing for Cosmos, in New York.

The video shows an unheard interview with South-African leader Nelson Mandela about Pelé, when he was awarded with the Laureus Lifetime Achievement Award in 2000.

Pelé for the new generations

Several installations were designed to attract the younger audience: at Young Pelé, an actor plays the future King of Football and talks to other kids about his childhood. Among the screens, a bootblack box symbolizes the years of poverty Pelé faced as s kid, before he stood out as a football player, when he was only 10 years old. In Kevinho and the King, a performance by MC Kevinho, who the young audience loves, tells the story of Pelé to a funk rhythm. 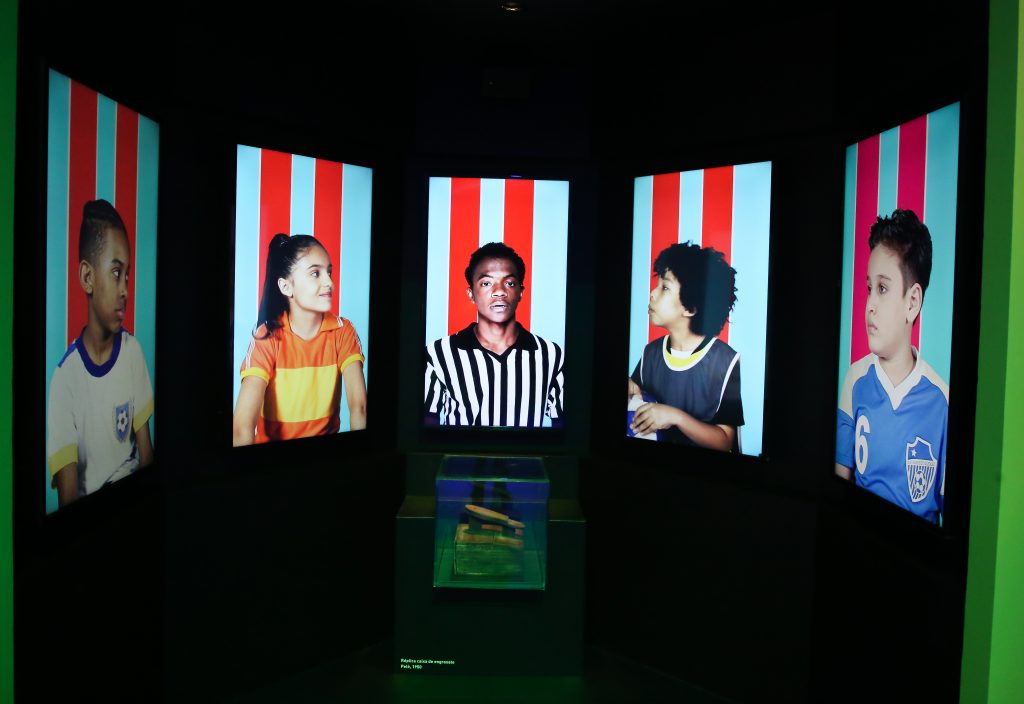 Then, the visitors are invited to play the Pelé Forever Quiz Game. The game virtually hosted by Marcelo Adnet challenges the audience to answer questions about the King’s career, based on excerpts from the movie “Pelé Forever” by AníbalMassaini. Other games include Guessing Game and Word Game, which also present facts and stories about Pelé using images and questions.

All interactive contents of the exhibition are activated from the visitor’s cell phone, in order to avoid contact with buttons and screens. Before starting the experience, each visitor checks in an interaction platform, using a QR Code, and then controls the games on the screen of their own cell phone. Those without phones count on assistance of Museum supervisors and educators.

In the Great Plays installation, the audience can select among 10 of the most famous goals scored by Pelé to watch in table football format, in order to show his outstanding tactical vision. The Brazil loves King Pelé installation, the audience can watch interviews with 35 celebrities that are fans of the player, such as cartoonist Maurício de Souza, musicians Chico Buarque, Samuel Rosa, and Zeca Baleiro, football coach Tite, football player Marta and ex-player Dadá Maravilha, journalists Pedro Bial and CacoBarcellos, among others.

Finally, the The Four National Teams of Pelé honors the national teams with which he wrote history, together with dozens of other stars. In the tunnel that accesses the pitch, a sound installation tells the story of the relation between Pelé and the Pacaembu Stadium – born in the 1940s, both turn 80 together in 2020.

Inside the Football Museum Collections: Pelé at 80

In the year 2020, the King of Football celebrated his 80th birthday! Born in the city of Três Corações (in the Brazilian State of Minas Gerais), Pelé earned worldwide acclaim for his football-as-art virtuosity and mastery of the ball. At just 17 years of […]